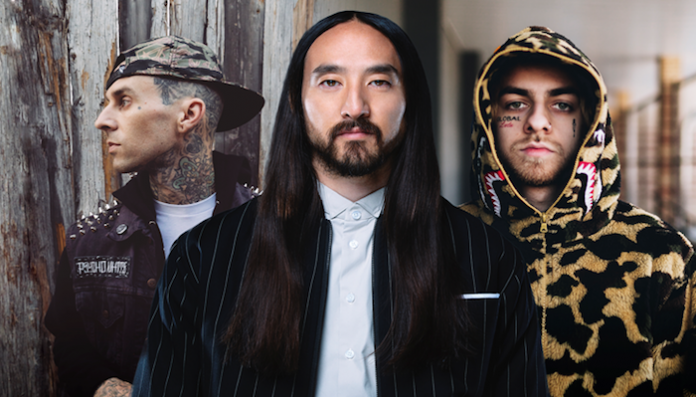 Just as all of your favorite “scene” dudes are hanging with EDM artists, Steve Aoki is doing the opposite. The EDM powerhouse, beatmaster Travis Barker and newcomer Global Dan have teamed up to create “Halfway Dead,” a slice of electro-plated pop punk that might reinvent your swoop-haired wheel.

“When I make songs, I’m trying to bridge worlds,” Aoki says. “I come from rock: I’ve been in bands and I’ve done collabs with Linkin Park, blink-182 and Fall Out Boy. And I just like it. It goes close to my heart. This song is interesting because it’s got a punk vibe, a pop- punk vibe, but also hip hop and obviously electronic.”

“Halfway Dead” is exactly the kind of reboot pop-punk needs. Global Dan captures that heartbroken yet snotty teen vocal with a hip-hop patois. And Barker (a seasoned mixologist in his own right) just slams the beats down.

“It’s part of this new culture that’s taking influences from Sum 41 and Tom DeLonge, the voices that we all grew up listening to,” Aoki says. “And then adding this hip-hop lyrical element with a sentiment that’s very punk-influenced.”

“I started listening [to pop punk] when I was 14, 15,” Global Dan says. “I used to skateboard a lot, when MySpace was really, really at its prime. Jeffree Star was getting like a lot of buzz and the emo scene phase. I wouldn’t really say ’emo’: I’d rather say ‘scene,’ with the teased hair, snakebite [piercings] and the really tight skinny jeans from Hot Topic. That’s when I started getting influence from that. My dad had put me onto classic rock. So I like that a lot. [The song] is pop-punk influenced, but it’s authentic pop-punk.”

Read more: Top 10 rock/EDM crossovers you should add to your playlist.

Now anybody truly familiar with Aoki knows his rock bona fides are in order. His Dim Mak label was responsible for early records by vaunted alt/indie bands (Battles, Bloc Party) and hardcore outfits alike. This writer once saw him spinning records in a parking garage in Austin, Texas, opening for Gang Of Four. While other scene staples are seemingly trying to escape their Warped Tour pasts, Aoki’s doing the hard left turn into pop-punk. Turns out that a lot of pop-punk bands didn’t want him in their corner.

“Let me tell you, it’s very simple,” he begins. “I couldn’t find pop-punk bands. They just wouldn’t sign with me. I love pop-punk; I grew up listening to it! But I couldn’t sign any bands: Pop punk was too big for Dim Mak back then. Now, as a producer, I can work with bands that I could never sign because that was always how I wanted to do it. If I can’t sign them to Dim Mak, I fight to work with them.”

As for scene dudes seemingly trying to run from their past, Aoki isn’t about to throw shade. “I think it’s the culture now,“ he resigns. “You can’t listen to the internet or read the comments. You start doing that, you’re just living in fear.”

Read more: Fall Out Boy fans should listen to these records made by fans and stans

Another refreshing thing about “Halfway Dead” is its finesse. The brokenhearted and angry dork archetype is a pop-punk mainstay. But sometimes that sadness came along with some toxic misogyny. Global Dan not only hits it out of the park vocally, he conveys the vibe accordingly.

“I wanted to make it as friendly as possible,” he says. “The younger people will be able to appreciate it later on if they don’t completely understand the song now. I like the heartbreak–like positive heartbreak? [Laughs.] Like, that’s what it is. It’s not like a depressing, sad, heartbreak song. It’s like, ‘Damn, I’m heartbroken. But now it’s all good.’ Don’t trip about it, look past it in a positive way.”

What’s next? Aoki has signed Global Dan to Dim Mak and the two will continue working on Dan’s debut album. The duo will hit the road for eight weeks in support of Aoki’s next release, the 27-track Neon Future IV. And we didn’t even mention his new toy collaboration with Superplastic. Whatever he chooses to do, rest assured, Steve Aoki is always living his best life.

“I take everything that comes my way with gratitude,” he says. “I’m doing what I love to do and I know a majority of people don’t have that opportunity. It’s never a single moment.”

Check out “Halfway Dead” below, and grab tickets for Aoki’s tour here.