We are less than a month away from the highly-anticipated release of Machine Gun Kelly‘s full pop-punk album Tickets To My Downfall.

This week, MGK sent fans on a scavenger hunt which revealed all of the tracks and collaborations on the forthcoming album.

Read more: The internet is divided over Biffy Clyro’s rock take on “WAP”

Shortly following his big win for “bloody valentine” at the Video Music Awards last weekend, Machine Gun Kelly is ramping up the hype around Tickets To My Downfall by unveiling the full tracklisting. This week, he sent fans on a scavenger hunt around Los Angeles to find out which songs and artists are featured on the new album.

For the scavenger hunt, fans had to drive around and locate 15 different bus stop benches that feature the titles and collaborations on Tickets To My Downfall.

set up a little bus stop scavenger hunt if you want to find out the song title’s before i tell them to you tomorrow pic.twitter.com/rndKG7se3J

Of course, fans accepted the challenge and managed to locate all of the bus stop benches very quickly. From the clues, we’ve learned that Tickets To My Downfall has 15 tracks and includes collaborations with Halsey, Trippie Redd, iann dior and, of course, blackbear on “my ex’s best friend.”

As well, Trippie Redd appears on the track “all i know” and iann dior is featured on “nothing inside.” Machine Gun Kelly and iann dior recently teamed up for the new horror musical podcast HALLOWEEN IN HELL which premieres on Oct. 10.

and here’s the final two!!! IM SO EXCITED!!! pic.twitter.com/u3Mvwvrykd

Back in January, MGK teased a collab with the Used‘s Bert McCracken. He also previously confirmed that he was working on new music with YUNGBLUD. Although MGK still plans to release these collaborations in the future, they are not included on Tickets To My Downfall.

“The songs with me and @yungblud and the song with The Used aren’t on this release because they are for something special coming after,” he tweets. “Trust the process on that decision.”

trust the process on that decision
😈🙏🏼

Along with the tracklisting and collaborations, Machine Gun Kelly plans to unveil the official Tickets To My Downfall album cover sometime on Friday.

Tickets To My Downfall tracklisting:

Pre-orders for Tickets To My Downfall are available here.

The official artwork for Tickets To My Downfall has been unveiled. The artwork, for some, may look familiar because it was first teased in the “concert for aliens” video on MGK’s microphone.

GUYS THE ALBUM COVER WAS ON HIS MIC pic.twitter.com/LNSTUjbhWs

As well, “misery business,” “roll the windows up,” “in these walls (my house)” featuring PVRIS and “love on the brain” are four bonus Tickets To My Downfall tracks that will be available exclusively through Target. 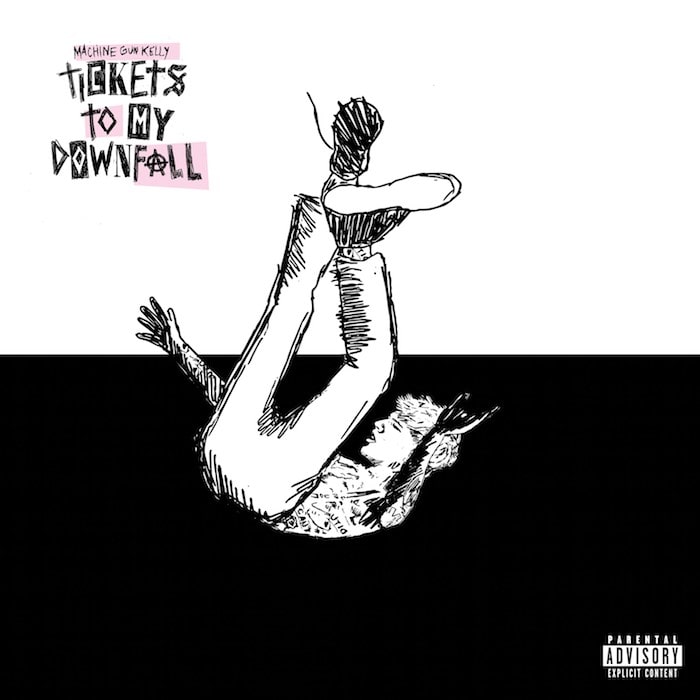 Are you excited for Tickets To My Downfall to arrive later this month? Let us know in the comments below.