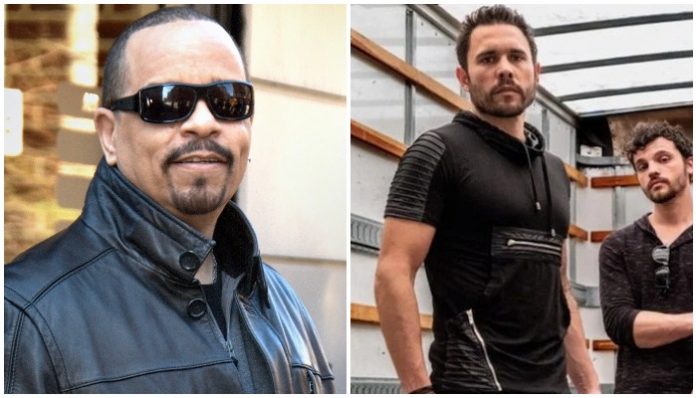 Trapt‘s Chris Taylor Brown is continuing his Twitter rants, that have now passed the month-long mark. If you thought the electric Ice-T portion of this was over, you were wrong.

Brown continues “defending himself” on Twitter and has now caused Ice-T to mock him again and might be fighting both Danny Diablo and Power Trip‘s Riley Gale.

Read More: Trapt try to get Taylor Swift’s attention by digging up 2014 I Prevail diss

For those who haven’t been following along, Trapt’s frontman, Chris Taylor Brown, drew attention to his Twitter rants by calling out Captain America star Chris Evans about Donald Trump‘s response to coronavirus. He began using #whiteprivilegedoesnotexist and spouting rampant hate in the direction of anyone who dared question his ideas.

At the start, it was random Twitter users. Brown resorted to his favorite insult which is something along the lines of calling people variations of “Bernie beta bitches.”

Once this got big enough, bands like Born Of Osiris, Power Trip, Attila, I Prevail and Dance Gavin Dance jumped in to shut this guy up. Brown’s main talking point was that Trapt’s streaming numbers on Pandora were way higher than everybody else’s. As soon as a band that was more successful than his chimed in, Brown moved on to a different target.

This eventually led to Gale of Power Trip challenging Brown to a battle of the bands of sorts. Both would play a show in Brown’s hometown at different venues, but at the same time. Whoever drew more of a crowd would win and the loser would donate their guarantee to charity. That never happened.

The Twitter tirade continued until someone made a Trapt parody account. This gained a lot of attention for its hilarious tweets that obviously got under Brown’s skin. Not able to take a joke, Brown threatened legal action against the parody account.

Next, Brown turned his attention to the Sumerian Records roster and calling out Body Count (Ice-T’s) band. Eventually, after he was tagged a bunch, Ice-T tweeted at Brown which is probably the most star interaction Brown has had in his entire life.

Read More: Here’s how you could make money watching all of the ‘Harry Potter’ films

The insults against Ice-T ultimately led to Diablo getting involved as he came to Ice-T’s defense. It all started when Diabo tweeted the following,

“WHY THE HELL WOULD YOU SAY SOME STUPID SHIT LIKE THAT TO@FINALLEVEL TRAPT IS A FUCKING JOKE. ICE IS A PIONEER & INNOVATOR. YOU ARE A NOBODY SINGING FOR A WACK BAND. LEARN SOME RESPECT.”

Well you are a massive loser who contributes nothing to this country! Get the fuck out… you damn freeloading POS

Read More: These iconic movie samples made an impression on your favorite bands

Diablo’s response obviously sparked something in Brown who, rather than letting it all go, decided to add more fuel to the fire by saying the following,

“Well you are a massive loser who contributes nothing to this country! Get the fuck out… you damn freeloading POS,” he tweets.

From there, a back and forth continued with both trading insults. Eventually, that feud quieted down as Brown tried to get Taylor Swift‘s attention by dragging I Prevail back into the mess.

That brings us to the here and now.

Trapt’s Brown has pretty much flown off the handle now. He started by challenging Ice-T to a fight who has remained cool and collected the whole time. He’s in such a blind rage that he also keeps shouting for a bare-knuckle fight between him and Danny Diablo and him and Riley Gale. He wants to fight both of them.

Sit back and enjoy the show.

Who is this Troll? https://t.co/i21YRyDYto

Who ever this Trap guy is.. I think his friends should get him help. Do an intervention or something.. Real talk.

Dude actually wants to fight me now…. lol Too funny.

So Ice-T jumped back in for a brief moment and ended with some wise words.

Then Brown went off again.

“Where the fuck is @DannyDiablo,” Trapt tweets. “I need to fight you in any way you want, cause I NEED to fight @RILEY_CYRUS bare knuckled! This is not a fucking joke!! This is man to man! If I need to get through Danny for the pleasure of cracking Riley’s face, sanctioned, I will! I want this!!!”

Where the fuck is @DannyDiablo? I need to fight you in any way you want, cause I NEED to fight @RILEY_CYRUS bare knuckled! This is not a fucking joke!! This is man to man! If I need to get through Danny for the pleasure of cracking Riley’s face, sanctioned, I will! I want this!!!

Attila’s Fronz jumped in for a quick joke.

okay….. sorry to bring this to the timeline but I literally BELLY LAUGHED when I read this. The dude is training to "grow 6 inches taller" and he also thinks he has a chance against Danny Diablo who would literally murder him with one punch. 🤣 https://t.co/j0FZOShVGb

This little bitch! I say if I have to do bare knuckle with @DannyDiablo to get you bare knuckle, so be it! Let’s goooooo!! https://t.co/VRhROtnFxR

Danny Diablo wants to set up the fight and donate all of the money to the Children’s Tumor Foundation.

@TRAPTOFFICIAL I JUST FINISHED DOING A TWO HOUR PODCAST INTERVIEW. YOU BLOCKED ME LIKE A LITTLE BITCH & NOW YOU’RE TALKING SHIT AGAIN. SIMPLE FACTS. I WILL GLADLY FIGHT YOU & I WILL GIVE ALL THE MONEY FROM THE FIGHT TO THE CHILDREN’S TUMOR FOUNDATION.

ALL I KNOW IS THAT @ChrisEnriquez
WILL SET EVERYTHING UP FOR THIS FIGHT. I’M NOT GONNA TALK ANYMORE. I’M GONNA DONATE ALL MY MONEY TO THE CHILDREN’S TUMOR FOUNDATION. I WILL RESPECT YOU AS A MAN @TRAPTOFFICIAL IF YOU DO THIS. STOP ACTING LIKE A BITCH.

POWER TRIP WILL BE PLAYING LIVE IN THE RING BEFORE I LNOCK YOU OUT.

what’re you gonna do? shit your pants at me?

The feud continues on with Brown peacocking about his physical prowess, band’s legendary status and how he’s going to break Gale.

ok, deal. no bare knuckle. no publicity. i don’t promote violence but if you want to touch me and get turned inside out, okay. that is, there’s anything left of you after @DannyDiablo gets done with ya. https://t.co/urTKnjwsBJ

Fuck you, you little bitch! You and your little bitch accomplices telling me I’m the bitch! I am going to break your face! Sanctioned! Let’s go!!! @DannyDiablo I will fight you however you want for a chance at this little bitch talking MAD shit!!!!

You are a bitch! You lie about me with no proof and you think I’m not going to MAKE DAMN SURE I see you around?! My anger dwarfs yours! You are a fucking pussy ass bitch! Fuck you @Revolvermag I’m coming after you next for allowing LIES to be told about me!!

If any details of this fight actually come to light and Trapt’s Brown doesn’t back out, you’ll hear from us.