We’re back with the latest AltPress Weekly. Every week, we highlight new things we want you to check out. We call attention to new songs and old hits, classic listens and fresh finds. We’ll also keep you up to date with the latest happenings at Alternative Press, along with the stories we keep coming back to.

June is flying by fast. We’re continuing our celebration of Pride Month and reflecting on the Juneteenth celebration that just passed. We’re also thinking ahead as summer and even fall news is swirling. More and more artists are revealing upcoming live performances with each passing day. The music world is buzzing, and we’re beyond excited by everything that’s coming down the lane.

Of course, our week at AltPress was also packed full of brand-new interviews, lists, exclusives, playlists and premieres. Without further delay, here are some of the things we’re thinking about this week. 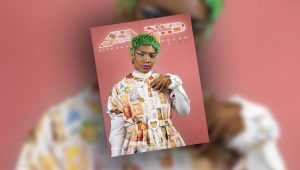 One of the ways AltPress is celebrating Pride Month is by recognizing the importance of LGBTQIA+ individuals to music and the broader community. We launched our Pride digital exclusive series with an interview featuring chloe moriondo and followed it with another highlighting drag queen sensation Trixie Mattel. Our latest cover highlights the career and work of Kane Caples. Caples is a fresh-thinking and socially-minded personality, engaged in work that fluidly crosses lines between skateboarding, fashion, community building and speaking out for transgender and nonbinary individuals. For the interview, Caples spoke with Josh Madden about their diverse interests, the deeper perspective that informs their worldview and the amazing progressive groups helping to ensure that the skating community is the perfect space for everyone.

Each week, more and more artists are announcing plans for live music. In the latest news, AltPress cover stars Chase Atlantic announced their North American Beauty In Death tour. We’ve had a number of chances to chat with the group about their work and the recent album, BEAUTY IN DEATH. In an exclusive Q&A, the band spoke about their plans for the tour and what it means to be going back on the road after the disruptions of COVID-19. “This has been a chance to rest, get back into creating music and experience concerts in a new way with livestreaming,” they say. “This break has just made us very eager to get back into doing what we love. With BEAUTY IN DEATH being released during COVID, we are very excited to get back on the road.”

Brooklyn-based foursome Pom Pom Squad have released their new album, Death Of A Cheerleader. Saturated with cheerleader imagery (and all of the associations that come with that iconic figure), the record is a perfect exploration of adolescence and the journey to adulthood. This week, we ran an interview between Erica Campbell and band leader Mia Berrin ahead of the new record. During the interview, Berrin spoke about the unique experiences that accompany the teenage years. “Things happen to kids that are shitty, but I feel like being a teenager is the first time you can put words to it with nuance,” Berrin says. “It’s just a culmination of so much pressure, being pushed out of the nest and into your first social situations or your first heartbreaks, your first identity crises. I feel like a lot of people freeze at the age where a significant trauma happens, and being a teenager is enough of a trauma for everybody that it’s easy to get stuck on that time in your life.”

Tyler, The Creator – Call Me If You Get Lost

Tyler, The Creator has released his latest album, Call Me If You Get Lost. The artist was busy in the days leading up to the release. Fans have been treated to previews in the form of videos for “LUMBERJACK” and “WUSYANAME.” They’ve been catching hints elsewhere, as well. Earlier this month, Tyler dropped a teaser for the album, “SIDE STREET,” showcasing the artist engaged in a furious make-out session from a pink sports car. This week, he unveiled a sketch called “BROWN SUGAR SALMON,” which depicts a humorous and frustrating train journey. The standout in the leadup, however, was the video for “WUSYANAME.” Perfect for a project saturated with retro sensibilities, the song layers Tyler’s verses over breezy string tracks, cool synths and a buoyant bassline.

More than a year since Real Friends announced that they had mutually parted ways with former vocalist Dan Lambton, the group are back. Returning in full force, they are joined by Cody Muraro, formerly of Parting Ways and Youth Fountain. The band also revealed their signing to Pure Noise Records, along with two singles and a new video for “Nervous Wreck.” The propulsive song creates a perfect contrast with its partner “Storyteller,” a more measured track with a hint of melancholy. AltPress Editor In Chief Paige Owens spoke with Muraro and Kyle Fasel for an exclusive discussion about the group’s new music, signing and more. On the topic of the new material, Fasel characterizes it as the perfect way for Real Friends to make their return. “These two songs are exactly what I want the world to hear when they first hear this new version of Real Friends,” Fasel says.

In one of his latest contributions, our Resident Punk Professor Tim Stegall turns back to one of the great cities trapped in that endless debate about where it all began: New York City. Stegall revisits the tumultuous energy that surrounded CBGB, Max’s Kansas City and the broader punk movement from the Big Apple. The article calls to mind the filthy streets and filthier bars that provided a refuge for a seeming army of visionary artists, from Velvet Underground and Television to Patti Smith and the Ramones. Lest I implicate myself in the bitter NYC vs. London debate, enjoy the sounds of Rhino Records’ compilation of ’70s punk, No Thanks! The ‘70s Punk Rebellion. The stellar 2003 collection charitably pulls from both sides of the pond.

We’re witnessing a small renaissance in music, as styles become increasingly hybrid. One of the most exciting aspects of this transformation is the role of alternative culture in culture at large. In his latest article, Karl Smith explores the particular influence of alternative styles in the world of fashion. Smith compares brands such as Prada and Givenchy to artists such as Olivia Rodrigo and Rina Sawayama, who move fluidly between genres. Smith writes that this shift is less about prestige designers reaching into subculture for inspiration or the influence of brands like Hot Topic. Instead, it “is more about a wider sea change that’s been taking place over what now amounts to years and which was neatly encapsulated in Prada’s Spring/Summer 2022 presentation at Milan Fashion Week last weekend: the slow and steady merging of subculture into culture at large.”

As if he wasn’t busy enough, Stegall also wrote another article about the significance of the year 1996 for punk history. A continuation of his series exploring punk throughout the years, Stegall shows 1996 was a fascinating moment. Twenty years had passed since the Sex Pistols and the Ramones unleashed their rebel yell, rendering the origins debate all but academic. The ’90s saw the changing of the guard to groups such as Bikini Kill, Anti-Flag and Sublime, who brought new dimensions to the style. That period also saw the continued development, reformation and rediscovery of punk pioneers such as the Sex Pistols and the Misfits as a new generation came to understand the classics for what they truly were. In this sense, 1996 was a year when it became increasingly obvious that punk was a multifaceted, multigenerational genre, destined to continue expanding across the globe.

We recently overhauled our Spotify playlists, ensuring they continue to bring you the best in music. From New Alternative and AltPop Essentials to Future Of Alternative and Top Women Empowerment Songs, our lists embrace a wide range of artists, styles and even time periods in the history of alternative music. This week, I wanted to highlight our Top Alternative list. Top Alternative is updated weekly, meaning it stays jam-packed with some of the freshest and most exciting tracks. This week, we’ve updated the list to highlight a number of artists with new music. We recently updated the list to include KennyHoopla’s collab with Travis Barker, as well as new Angels & Airwaves, DE’WAYNE, Waterparks and Turnstile.