Welcome back to another AltPress Weekly. Each week, we highlight the things we want you to check out. We’ll bring you the scoop on the latest happenings over at Alternative Press, along with our favorite stories and other discoveries. We’ll also shout out fresh cuts and bargain bin finds—anything and everything we can’t stop listening to.

This week was jam-packed with new releases. There’s something for everyone, whether you’re here for pop punk, metal, alternative or something else. Of course, we also brought you our usual haul of news, lists, exclusives, playlists and premieres. Let’s get right to it! 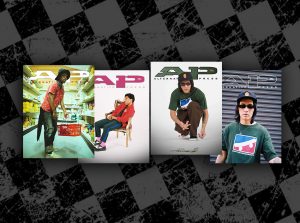 Last week, we revealed the two artists who will appear on the cover of our upcoming July issue. Editor-In-Chief Paige Owens made the announcement, bringing a hint of what is to come when the magazine drops. KennyHoopla will make his AltPress cover debut. In the wake of his eight-track collaboration with blink-182’s Travis Barker, SURVIVORS GUILT: THE MIXTAPE//, Kenny is paving the way for a new era in alternative and beyond. Joining the artist is Eyedress, also making his cover debut. We’re just a few weeks out from his singles “Prada” (feat. Triathalon) and “Brain Dead.” The groundbreaking Filipino musician is gearing up for his fourth studio album. Titled Mulholland Drive, the new release will arrive Aug. 27 via Lex Records.

WILLOW – lately i feel EVERYTHING

WILLOW has released her new album, lately i feel EVERYTHING. We at AltPress have been eagerly anticipating the new release ever since we brought the news of her Barker collab,  “t r a n s p a r e n t s o u l.” Since then, we’ve revealed our cover featuring the artist, excitedly received the tracklist for the album and brought you the interview where the star detailed her exciting new direction. WILLOW situates the album in pop punk but sees it as taking the genre to a new level. “This album, it’s pop punk, but to make it authentic to me, I had to put a little bit of those alt-rock vibes in there, too,” WILLOW says. “I had to put a little bit of those shoegaze vibes in there, those Mazzy Star vibes.”

On the eve of her brand-new EP, And The World Will Turn, we published our interview with Tatiana Hazel. During the conversation, the multifaceted artist talked about her sound and the unique career that has led her to the intersection of music and fashion. “I don’t really identify with a certain genre,” Hazel says. “When people ask, ‘What kind of music do you make?,’ alternative pop is what I say because it’s not straight radio stuff but also not fully alternative either. It’s a little more catchy. It’s really hard for me to even label myself, so when other people try to, I feel like it’s inevitable because people are always trying to put a name to something or define something. But I feel like the more music I put out, the more it will speak for itself.”

AltPress has also published my interview with Matty Taylor of Tennis System. The story accompanies the release of the group’s latest single, “Dizzy.” Ahead of the release, Taylor broke down the inspiration behind the track and its provocative visual. More than that, Taylor offered a deep dive into his upcoming album, Autophobia. A thoughtful album exploring the concept of solitude, the record is a response to the isolation of COVID-19 as well as Taylor’s decision to continue the project as a solo effort. In framing the narrative this way, Taylor offers a timely meditation on the often-omnipresent loneliness of the modern age. However, he also offers an occasion to learn to live with ourselves, to find self-reliance and to embrace the fact that we are all singularities.

After making a name for himself as a skilled multi-instrumentalist with Good Charlotte, Billy Martin has continued to push forward. The artist has been active behind the scenes, giving back to many artists as they develop their own unique sounds. Martin’s influence spans an impressive range of genres, from hip-hop to pop punk and everything in between. We broke down Martin’s role in the industry, showcasing some of our favorite tracks that he’s produced. Martin has collaborated with a broad range of established and rising artists, including Chase Atlantic, boyband, Smokeasac and Brennan Savage. In so doing, the article demonstrates the way artists are evolving, crossing lines and redefining music for a new era.

Underoath have surprise-released a new single, “Damn Excuses.” The track dropped via Fearless Records and perfectly encapsulates the anxieties of the past year. Keyboardist Chris Dudley says recording the new track was therapeutic. “This song came out of nowhere for us,” Dudley says. “In hindsight, it probably stems emotionally from the anxiousness that a year of isolation will give you, and that ‘wanting-to-explode’ feeling came out with zero effort. It was therapeutic. This is us ready to get back into a loud room with sweaty people and experience something real together.”

Inner Wave have released their new single, “Take 3.” The group also announced their fourth full-length, Apoptosis, due Sept. 30. The new track speaks to the monotony of quarantine life. It’s a timely message for anyone who has suffered through the doldrums of COVID-19, the awful mix of apathy and fear that shaped so many people’s lives in the past year. As if trying to stem the tide, the track constructs a musical blanket of warmth with its sonic palette. It’s the perfect foil to our age of boredom, reaching back to the easygoing, all-encompassing feel of groove-based R&B.

ALX dropped his latest single and video, “Run Out.” The song, released through Sony Music Entertainment/Alamo Records, marks the artist’s second single of 2021 since the June release of “Right Guy.” Directed by Tommy Nowels and produced by July, the new track gives another glimpse of the rising artist’s emerging vision. Last year, the humble young talent gave Ones To Watch a glimpse of his simple, music-first process. “Studio time really consists of me and maybe one or two other people,” ALX says. “I don’t like a lot of distractions. I go there to sing and lay down vocals. It’s not like a party for me.“

AltPress’ resident Punk Professor Tim Stegall is back with the latest entry in his ongoing exploration of regional punk scenes. This time, Stegall sets his sights on the city of Boston, a place that (unduly) can be overshadowed by major metropoles such as New York City and L.A. Stegall weaves a narrative that begins with the rise of punk in Boston, from the early garage-rock roots of the genre to a famous visit by the Velvet Underground and Jonathan Richman’s transformative work with the Modern Lovers. As the story builds, the article reveals a wave of pioneering acts, including Mission Of Burma, the Real Kids, the Neighborhoods, Nervous Eaters and many more.

In our latest AP Recs article, Brenton Blanchet connected with rising hyperpop-sensation glaive. The project of 16-year-old wunderkind Ash Gutierrez, glaive has remarkable reach and clarity of vision. During the interview, he showed us what it’s like to find success at such an early stage. On top of it all, Gutierrez is also self-taught. The artist credits his approach to the influence of video game music and his desire to craft strong stories. “When I was making music for the first time, even when I was awful at singing, really bad at mixing, I was still attempting to tell a cohesive story and make everything fit together,” Gutierrez says. “I think over time I’ve gotten better at singing and better [at] recording in general. I feel like that has stuck with me, like the actual songwriting aspect and trying to tell a story.”