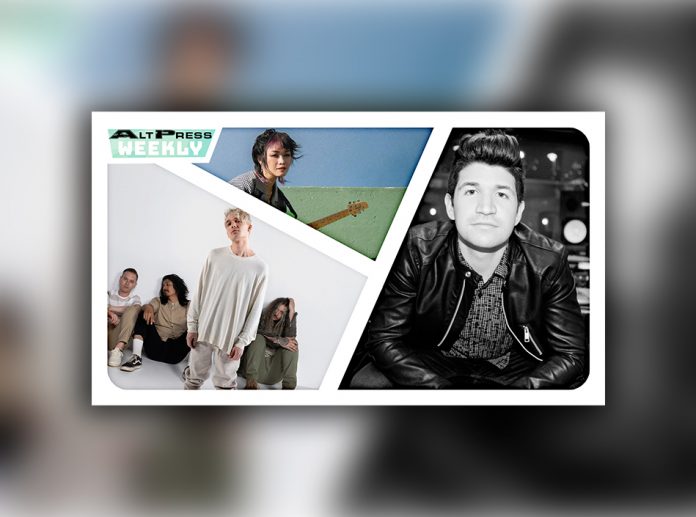 We’re back with a fresh AltPress Weekly. Each week, we highlight the things we want you to check out. We shout out brand-new tracks and classic cuts, deep dives and smash hits. We’ll also bring you the scoop on the latest happenings at Alternative Press, along with the stories we keep coming back to.

Many readers may have received their copies already, but if you haven’t heard, our June issue featuring cover star WILLOW is now shipping out. Shot by legendary photographer Atiba Jefferson, last month’s issue is jam-packed with interviews and lots of other content, highlighting a range of artists including Pretty Sick, DE’WAYNE and Shamir Bailey.

Of course, things were also buzzing over on the AltPress website. We brought you tons of news, lists, exclusives, playlists and premieres. Let’s get into it! Here are some of the things we’re thinking about this week.

Women who made the ’90s memorable

At AltPress, we love all things ’90s. We’ve regularly covered this iconic decade, from the best albums to the major years of punk history. We’ve also paid close attention to the stellar women who made the era a crucial period in alternative music. This month, we ran Katie Schmidt’s article on some of the most powerful women vocalists of the era. The list zooms in on a period when upstart genres such as grunge, hip-hop and many others were reshaping popular music. Schmidt highlights a wide range of transformative singers, from Ms. Lauryn Hill and  Bikini Kill’s Kathleen Hanna to Erykah Badu and Garbage’s Shirley Manson. Along the way, the article reveals a dynamic moment in music, as well as the key role of women artists in the era.

People behind the scenes of pop punk

Pop punk is experiencing something of a revival these days. Many people might be surprised to see how many veterans and other industry personnel are working behind the scenes to help the genre remain vital. Ryan Piers’ recent article highlights the many people supporting the genre we all know and love. The article calls attention to people including Julia Michaels, Zakk Cervini, Travis Barker, Billy Martin, Avril Lavigne and more. On the surface, the story tells a simple narrative, identifying the key players working to help develop some of your favorite recent music. However, the article reveals a deeper fact about pop punk: The genre is a multi-generational phenomenon, rooted in a broader community of artists and their supporters.

Hulu is now streaming the Questlove-helmed documentary Summer Of Soul (…Or, When The Revolution Could Not Be Televised). The new film tells the story of the 1969 Harlem Cultural Festival, a musical event that took place in New York during a pivotal period in music and culture more generally. While the event was filmed, it was largely unseen for over 50 years. Producer Hal Tulchin dubbed the event “Black Woodstock” in reference to the other major festival that took place that year. The event hosted a large cast of some of the most important artists of the era, including Nina Simone, Sly And The Family Stone, Stevie Wonder and Gladys Knight And The Pips. More than a major moment in music history, the event represents one of many milestones in the fight for Black freedom in the United States.

Badflower have released the new single “Family.” The group also announced their sophomore album, THIS IS HOW THE WORLD ENDS, due out Sept. 24. Ahead of the release, Taylor Linzinmeir chatted with lead singer Josh Katz about the new track and the upcoming record. “I’ve been growing a lot as a person lately and realizing some uncomfortable things about myself,” Katz says. “‘Family’ was my way of talking about it and trying to understand my feelings and behavior. It was one of those songs I didn’t think very hard about. I needed to say the things I said, and I needed to hear myself say it. And by the end, I had a better perspective on some of my most complicated emotions.”

Twin Shadow (George Lewis Jr.) has released his debut full-length album Twin Shadow. The new record is brimming with life. Emotionally, the release embraces joy without naivete, looking unapologetically at difficult moments and finding a reason to carry on. Stylistically, the album looks at history with warmth and affection, not cold nostalgia—a rare move in these retro-inclined times. Lewis pulls from classic punk, golden age soul, his Dominican heritage and more. The musician cites the energy that followed Nigerian rock legend Fela Kuti in particular. “If you watch Fela Kuti’s band and you don’t pay attention to him for a second, you watch his guitar player and he’s jumping up and down—feeling all this joy,” Lewis says. “And that was the thing I wanted to try and chase after.”

US businesses with Instagram Shops can now show a “Black-Owned” label on their profiles so you can better discover them.

Instagram recently announced the creation of a new “Black-owned” tag that business accounts based in the U.S. can add to their profile. In a new article for our website, Augusta Battoclette calls attention to a number of Black-owned alternative brands on the platform. Battoclette highlights the popular support for Black-owned and -led businesses that surged on Instagram in the past year. Her article also showcases the ways that Black creators are contributing to the alternative world in particular. Dozens of individuals are working to provide a unique perspective on fashion, skateboarding, makeup and more. The list highlights a range of brands, from Proper Gnar and Glam Goth Beauty to Filosophy and Àshabi.

In June, we released the first part of Paige Owens’ roundtable interview from our Power Issue: Women Rising, featuring Amy Lee, Lzzy Hale, Taylor Momsen and Maria Brink. The group had a broad, open-ended conversation about their careers, the state of music and their vision of a world where “female-fronted” was no longer a stigmatized qualifier attached to the work of artists. Now, we’ve released the second installment of the feature. In the second part, the group turned to the perennial myth that rock is dying. During the conversation, Momsen addressed the notion of rock’s death directly, saying, “You can’t eliminate rock ’n’ roll. It can’t die. Anyone who says that it’s dead, in my opinion, they’re just incorrect because you’re looking at something from a mainstream perspective…. So it has its moments where it shines, but it’s never gone. I always just say rock is resting, and it’s just waiting for the fans.”

American Teeth, DE’WAYNE and phem have teamed up for the new track “SICK.” The driving musical accompaniment perfectly captures the song’s lyrics, which embrace all the bad habits we can’t seem to escape. Elijah Noll (aka American Teeth) spoke about the inspiration behind the track as well as the collaboration. “The song is a celebration of accepting my bad habits and owning myself fully,” Noll says. “We’re all a little ‘SICK,’ and that’s OK. This was my first collaboration with phem and DE’WAYNE—I’m a fan of both artists, so it was a lot of fun to work on this one together, along with [producer] Colin [Brittain].” DE’WAYNE, fresh off the release of his debut album, STAINS, also addressed his enthusiasm for the project. “American Teeth and phem already had such a great record,” he says. “And when they hit me for it, I just wanted to take it all the way home for them.”

Known for her work with Covet as well as her accomplishments as a solo artist, Yvette Young is a thoughtful and visionary guitarist. While her guitar playing reflects her skill and dedication to the craft, she also brings an elegant and creative approach to all of her projects. Josh Madden spoke with Young about her journey as a musician, her beautiful painted guitar for WILLOW and her vision for her art. “For me, just the ability to spread the gospel and joy of playing music for the sake of self-expression,” Young says. “Maybe even you can branch out and say exploring your own identity, having, I guess, a productive outlet in this chaotic world. For me, if I can just help anyone with that, with their journey and inspire anyone to want to pick up a guitar, or want to play music or even have the courage to do something that maybe not a lot of people who look like them do, that’s all worth it.”

We’ve also published a discussion between yours truly and director Erik Rojas. After relocating to L.A. and breaking into the film industry, Rojas established himself as a major creative talent in the world of music videos. He has already collaborated with a number of artists, including Waterparks, Jessie J and Chase Atlantic. During our interview, Rojas recalled the first “mystical” moment when he shot an artist live in concert while still a student. From there, he walked us through his journey, which has led to bigger and more ambitious projects as well as deep creative friendships with a wide range of artists. He told us about his bold usage of color on Chase Atlantic’s “HEAVEN AND BACK,” what it was like to destroy a car with Waterparks and how he created a fun, community atmosphere on the set of Herizen’s “Troublemaker.”