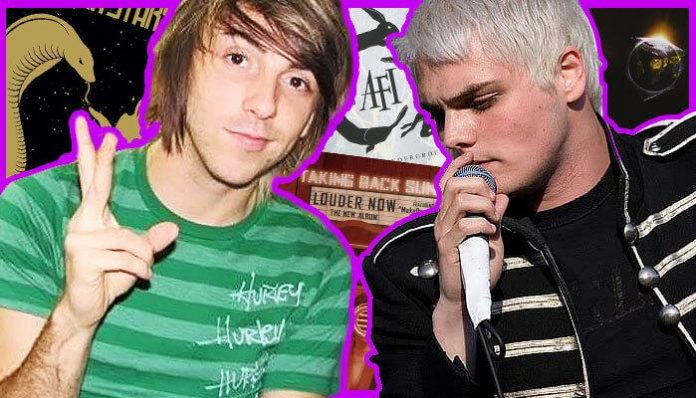 By 2006, scene culture had grown roots in every mainstream area possible. Myspace took over as the primary mode of social media communication, and bands spread like wildfire once they uploaded music. It was a whirlwind year, as music became more accessible to a larger group of people, Hot Topic brightened its lights and studded belts were an essential accessory.

While emo, pop punk and hardcore bands continued to release albums worthy of immense praise, scene became the dominant offshoot of these genres, and it didn’t intend on slowing down. As legendary acts perfected their sound, new ones emerged with a newfound fervor for making alternative music. Their success made these 20 albums from 2006 essential to any playlist back then and even now.

Read more: Discover 50 unsigned bands from every state in the US

+44 – When Your Heart Stops Beating

While Tom DeLonge was flying solo with Angels & Airwaves following blink-182’s split, Mark Hoppus and Travis Barker formed +44 and debuted their first album, When Your Heart Stops Beating. The album is consistently upbeat and entirely drenched in pop-punk sounds. Lyrically, it details the aftermath of blink disbanding and all of the emotions that came with it. They shift from moments of light such as in the title track to darkness in “Baby Come On.” Ultimately, +44 are the adult version of blink-182 in which they face the seriousness of adulthood and come to terms with life as they know it.

The seventh album from the already well-established and legendary AFI, Decemberunderground, proves that their musical stylings are tried and true. While they matured sonically by continuing to hone their craft, AFI ventured toward a synthwave influence similar to Depeche Mode. “Miss Murder” and “Love Like Winter” are a masterful mixture of an array of genres, such as goth, sythpop, emo, post-hardcore and punk.

All Time Low – Put Up Or Shut Up

Put Up Or Shut Up was All Time Low’s first lengthy EP that set them apart from any other emo or pop-punk band who existed at the time. Alex Gaskarth’s lyrics and vocals are a battle between reaching adulthood when teenage years were plagued with disappointment and heartbreak. The release details how youth can feel wasted and not knowing where to go when it’s all gone. Put Up Or Shut Up put All Time Low on the map, and they’ve only created more classics since then.

The debut album from Angels & Airwaves, We Don’t Need To Whisper, is a concept album about the future and its potential to become a utopia rather than a dystopia. After leaving blink-182, DeLonge formed AVA to establish himself as an artist who could create music with a deeper meaning. While songs such as blink’s “Feeling This” are classics, no longer did DeLonge sing about chasing a girl. He shifted sounds entirely with tracks such as “The Adventure” and “It Hurts” for a deeply emotional call to action. We Don’t Need To Whisper is truly a tour de force of what DeLonge is capable of, with or without blink-182.

Read more: Here are the 18 best scene vocalists from the 2000s

The self-titled debut album from Boys Like Girls is a semi-autobiographical retelling of vocalist Martin Johnson’s experiences. It’s composed mostly of pop-punk sounds with lyrics that detail the concepts of finding love in the most unexpected places. While sonically pop punk, lyrically it’s pop with an emo twist as a result of the intense emotions Johnson channels.

Cobra Starship – While The City Sleeps, We Rule The Streets

While The City Sleeps, We Rule The Streets was the debut album from the newly formed Cobra Starship. After leaving Midtown, Gabe Saporta formed the band with a sound heavily drenched in keytar and synthesizers. The band sported a pop sound with punk and emo influences but abandoned the drama for a more lighthearted approach. For the album, Saporta ended up basing most of the lyrics on his personal life, such as “Being From Jersey Means Never Having To Say You’re Sorry” as well as his experiences in the music industry prior to forming Cobra Starship.

Dashboard Confessional’s Dusk And Summer is the fourth LP from the mind of emo legend Chris Carrabba. The album is inspired by the feelings he experienced when driving to the beach and hopefulness in the world. It’s mixed with emo sounds that Carrabba is known for while adding alternative elements to capture the lyrics’ true essence. While he utilizes traditional instruments, Carrabba included experimentation with mandolins and flower pots over drums, making this an unforgettable release.

From First To Last – Heroine

The second album from From First To Last, Heroine, is a gritty output that’s lyrically obscene and charged with such intense energy, it remains a staple to scene culture. It was the band’s best-selling album and was the last to feature Sonny Moore on vocals. Singles “The Latest Plague” and “Shame Shame” encapsulate the raw emotions that express disdain, anger and resentment. The record established that FFTL could truly find a place in the mainstream scene.

Hellogoodbye’s debut, Zombies! Aliens! Vampires! Dinosaurs!, established scene music was branching off from its roots in both emo and punk. With “Here (In Your Arms),” they gave scenesters an anthem to dance and sing along to about love and yearning. Their synth-fueled sound with upbeat lyrics to match made them a band who were on everyone’s Myspace profile. They embraced the creative spirit of scene music and unapologetically showcased it through their unforgettable debut album.

Hit The Lights’ first full-length, This Is A Stick Up…Don’t Make It A Murder, is charged with a powerful pop-punk sound mixed with emo lyrics about revenge and love lost. Sonically, Colin Ross’ vocals are a punch to the gut with singing that puts whoever has hurt him on blast. With intense introductions to nearly every song, Hit The Lights establish that they are a band fueled by the angst of youth and turned to music to encapsulate those deeply personal emotions.

Read more: 15 scene bands from the 2000s that you probably forgot about

If MCR’s two previous albums didn’t solidify how conceptually vibrant and lyrically fantastical they are, The Black Parade certainly did. My Chemical Romance’s matured emo-punk sound put a spin on classic melancholic tropes with the provision of hope and celebration. The album took influence from David Bowie, Queen, Pink Floyd and more to create its unique rock-opera sound. With anthems such as “Welcome To The Black Parade,” they successfully crafted a masterful record that continues to influence the scene to this day.

The Red Jumpsuit Apparatus – Don’t You Fake It

The debut album from the Red Jumpsuit Apparatus, Don’t You Fake It, is an amalgamation of every piece of emo, punk and hardcore that makes the genres so great. With “Face Down” and “False Pretense,” the band established that they could artfully capture the traumatic experiences of youth and present it in a memorable fashion with intense musicality. Emotionally raw, the album continues to be an integral contribution to music and the evolution of the alternative scene.

Less than a year after the release of their debut EP, Anthony Green left Saosin, and the band immediately set out to release their first album in 2006. With Cove Reber as lead vocalist, they created an all-new sound that was part rock and part whole-hearted emo. Throughout the album, Saosin reflect on the departure of trusted friends and growing apart with songs such as “Voices.” With guitar riffs aplenty, their self-titled record set the stage for a fresh lineup and sound.

Senses Fail’s second album, Still Searching, expresses their ability to perfect their unique sound that mixes emo, post-hardcore and screamo. They utilized influences from TBS in single “Calling All Cars” and crafted their new album with their first in mind. Overall, Senses Fail stuck to their original tonality but strengthened it with added inspiration from Southern rock and traditional emo.

By third album Louder Now, Taking Back Sunday had grown away from their emo sound and branched into alternative rock. While they retained lyrics resembling the genre’s emotional devastation, Louder Now explores anger and forgiveness of mistreatment by loved ones. It’s a charged album with punchy vocals and catchy melodies. Songs such as “Liar (It Takes One To Know One)” and “MakeDamnSure,” Taking Back Sunday established that their sound had grown into adulthood with them and showcased their ability to break the mold.

This Providence’s first full-length captured complex emotions associated with emo music and upbeat tempos capturing the love behind the lyrics. With songs such as “My Beautiful Rescue,” the band mixed the tragedies traditionally found in emo and pop punk with the delight of finding love that resembles pop hits. While This Providence feature a range of emotions on this album, it mostly consists of finding joy in sadness.

While other bands were debuting their first albums, Yellowcard released their fifth record, Lights And Sounds, in 2006. Conceptually, it centers around growing into where one fits into the world and what they do to contribute to the environment around them. Yellowcard departed from their pop-punk past and embraced a new alternative sound. Lights And Sounds is their attempt at growing sonically while retaining the self, even when the lyrics establish a lost sense of purpose.