The second leg will maintain Swae Lee and Tyla Yaweh as support.

Post Malone is wrapping up the first leg of his Runaway tour this week with a two-day stop in Los Angeles. The tour has boasted praise from scene favorites such as Frank Iero and Billie Joe Armstrong, the latter of whom even played beer pong with the rapper.

Now, Posty is revealing a second leg, and he’s bringing along support from the meme-inspiring first leg in Swae Lee and Tyla Yaweh.

Post Malone will continue the run in support of his best-selling 2019 album Hollywood’s Bleeding. The rapper dropped the latest video off the album for “Saint-Tropez” in September, which you can check out below.

The feature-packed LP also includes verses from tourmate Swae Lee (“Sunflower” from the Spider-Man: Into The Spider-Verse soundtrack), Ozzy Osbourne and Travis Scott (“Take What You Want”), Young Thug (“Goodbyes”) and Halsey and Future (“Die For Me”) among others.

Posty will lead an epic crossover performance this Sunday, Nov. 24 on the American Music Awards as he recruits Osbourne and Scott for the live debut of “Take What You Want.” Green Day will also be performing a special set for the 25th anniversary of Dookie.

A full list of nominees including Panic! At The Disco, Billie Eilish and Halsey is available here. Voting is open until Nov. 20 and can be found here. The 2019 AMAs will air live from the Microsoft Theater in Los Angeles on Nov. 24 at 8 p.m. ET on ABC. 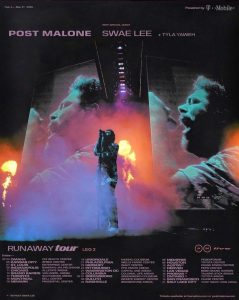