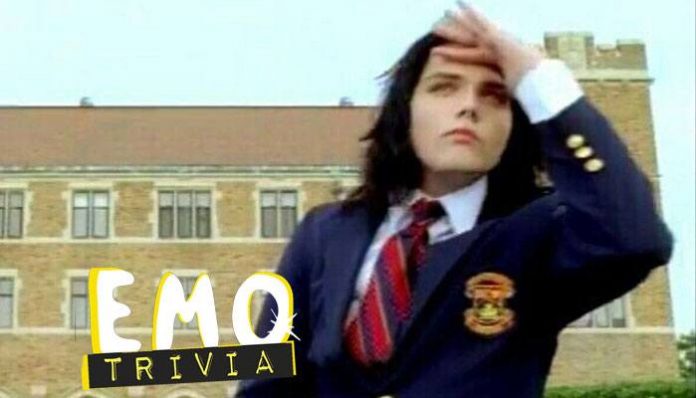 We at AltPress hold the emo title in high regard and fully embrace all subsects of fans who proudly stand under the genre’s umbrella without discretion, only pure, kindred acceptance. We celebrate those who have first pressings of Sunny Day Real Estate vinyl, early 2000s My Chemical Romance fanatics who enlisted in the MCRmy during the Revenge years and teenagers who are currently scribbling Lil Peep lyrics on the soles of their Chuck Taylors in between gym class and study hall. It doesn’t matter if you love the Promise Ring or Panic! At The Disco (or both!): You’re all good in our book.

We’ve turned our personal fandom into a game—pulling the AltPress staff’s collective pool of emo knowledge together so we can challenge all of your favorite bands and put their emo cred cards to the test for our APTV segment “Emo Trivia.” Find out if you’re more emo than Jack Skellington wearing black skinny jeans and guy-liner in this quiz composed of some of the best questions from ALTPRESS EMO TRIVIA. Be warned: These questions have stumped the Maine, TWIN XL, Sleep On It and Stand Atlantic. Get a fresh box of tissues and throw on some American Football—it’s time you put your emo knowledge to the test!

See how you fared against all of your emo favorites below and catch every APTV Emo Trivia here.

In the hilarious video, we see four people sitting across from one another. Two believe that Fall Out Boy is emo and two believe they are not. It contains a slew of funny categories ranging from wanting to work at Zumiez to Pete Wentz’s penis.

The debate starts by discussing what categorizes an emo band or song, which is a great way to start a debate. We’re sure all of us went to a high school where people though Silverstein were emo or Hawthorne Heights was a screamo band. It’s okay, we forgive them. But, defining what boxes need to be checked to fulfill a genre is important.

“Fall Out Boy falls into the same realm of what many emo kids were listening to back in the early to mid-2000s but it is not emo. It is more pop-punk. Emo should evoke more of a strong emotion. Whether that’s sadness or anger, and Fall Out Boy simply does not do that,” Padilla says.

Read more: 10 emo songs from 2005 that never left your playlist

“That’s like, fully a subjective claim. You being like, Fall Out Boy doesn’t evoke any emotion; I mean I’ve cried listening to Fall Out Boy for sure,” Charlie Bardey chimes in.

“Oh really? Can you name a Fall Out Boy lyric that made you cry?” Which one?” Padilla says.

Bardey then goes on to explain the idea behind a loaded God complex being a gun and how it makes him tear up. The entire bit is satire but certainly hits on many main talking points of a genre conversation. They discuss Fall Out Boy not existing beyond 2006 and their new arena rock vibes. They also talk about the scandalous Pete Wentz nudes. Watch the video here and be prepared to enter a debate in your own head about whether or not Fall Out Boy is emo.