Spotify users listened to their favorite bands this much in 2019

Today, Spotify Wrapped 2019 was finally unveiled, showing us the tracks, artists and genres we listened to most this year. Just like last year, artists have also been able to get in on the fun with their own version revealing the total hours fans streamed them in 2019.

Read more: Tom DeLonge reveals solo song is about blink-182 “having quite the ride”

Head below to see just how much your personal listening tastes contributed to bands’ overall streaming totals in 2019.

blink-182 released NINE in September and featured on tracks with Goody Grace (“Scumbag”) and tourmate Lil Wayne (“What’s My Age Again? / A Milli”).

The Get Up Kids

Thanks for all the love on @Spotify this year! https://t.co/pQ6NtdDy99 pic.twitter.com/RDKa2HM03w

The Get Up Kids dropped sixth full-length Problems in 2019.

Shout out to you guys! Thanks for an amazing year on @Spotify. #2019WrappedArtists https://t.co/Ur0Izn0cvK

Papa Roach unleashed their tenth studio album Who Do You Trust? at the top of the year.

Thanks to everyone who's streamed us on @Spotify in 2019! https://t.co/43fhPNdEgu #Interrobang pic.twitter.com/MeD43YNbFB

Bayside surprised fans with their eighth LP, Interrobang, in October after announcing a few weeks prior.

Shout out to all the fans on @Spotify. Thanks for an amazing year. #2019ArtistWrapped https://t.co/YGaBSCwcet

Sleeping With Sirens came back as heavy as ever with How It Feels To Be Lost in September.

Paramore have stayed relatively quiet this year with the band taking some time for themselves. With no new music since 2017’s After Laughter, fans have thrived off their back catalog.

A big thank you to all 5.4 MILLION of you for streaming us 126.8 MILLION times on Spotify ⌛️ pic.twitter.com/HlSiz4xkRA

Set It Off released their fifth full-length Midnight earlier in the year, their first since signing to Fearless Records in 2018.

From First To Last

Wait till we get our Amazon Prime stats pic.twitter.com/b356RY3Y1k

From First To Last reunited in March for their first show in two years with Sonny Moore (aka Skrillex) on the mic. The band hasn’t released music since 2018 single  “Surrender,” their second single after “Make War,”  which marked Moore’s first since returning to the helm in 2017.

Palisades ended 2018 with a bang, releasing their fourth LP Erase The Pain that December.

Fit For A King

Fit For A King haven’t released any music this year, but they dropped their fifth full-length, Dark Skies, in September 2018.

Miss May I released their sixth LP, Shadows Inside, via SharpTone in 2017, marking their first not with Rise. This year, the band celebrated sophomore album Monument with a 10-year anniversary tour alongside the Word Alive.

With Confidence released their sophomore album Love And Loathing in 2018. This year, they reimagined one of its tracks and covered Train (“Drops Of Jupiter”) for Songs That Saved My Life Vol. 2.

This year, Doll Skin released their first album with Hopeless Records, Love Is Dead And We Killed Her. The band also contributed to Songs That Saved My Life Vol. 2 with a cover of Florence + The Machine (“Shake It Out”).

Thank you!! Tag us in your @Spotify wrapped for a chance to win some merch! pic.twitter.com/KKtP1MphOg

Thank you to everyone who listened to us on @Spotify this year! We appreciate every single one of you. Were we in your Top Artists for 2019!? #SpotifyWrapped pic.twitter.com/7iIAV2SZMT

State Champs followed up 2018 full-length Living Proof by covering Matchbox Twenty (“Real World”) for Songs That Saved My Life Vol. 2. Most recently, they teamed up with tourmates Simple Plan and We The Kings for “Where I Belong.”

Thank you so much for all the support this year 💚 pic.twitter.com/MRCxLgQNBL

Circa Surive contributed to Fearless Records’ Punk Goes Acoustic Vol. 3 with a stripped back version of “Act Appalled,” which is taken from 2005’s Juturna.

Following 2017’s Dead Reflection, Silverstein self-released a compilation of re-recorded tracks from their first decade as a band titled Redux: The First 10 Years. Most recently, they shared a live album from their 15-year anniversary tour, When Broken Is Easily Fixed (Live).

Shout out to all the fans on @Spotify. Thanks for an amazing year. #2019ArtistWrapped https://t.co/cwlthxJ7C9

Aidan Gallgher is best known as Number Five from Netflix’s adaptation of Gerard Way’s  The Umbrella Academy, but the actor/musician also released several songs this year. Among them are “Blue Neon (Club Version),” “Time,” and “For You.”

Beartooth dropped the deluxe version of 2018s Disease in October, which included Record Store Day exclusive B-sides. The release followed The Blackbird Sessions EP in September which had the band giving Disease tracks a folk spin.

5 Seconds Of Summer just released their third full-length Youngblood last summer, but they kept plenty busy in 2019. In May, the band dropped a dark new single, “Easier” followed by “Teeth.” The latter track appeared on the 13 Reasons Why season 3 soundtrack and later sparked a hilarious #TEETHChallenge.

Angels & Airwaves released “Rebel Girl” in April as their first new music since 2014’s The Dream Walker and demos drop in 2016. They followed it up with another single, “Kiss And Tell,” in August.

Ice Nine Kills released fifth full-length The Silver Scream in October 2018, following it up with a deluxe version titled The Silver Scream FINAL CUT. The album included latest Scream-inspired single “Your Number’s Up.” 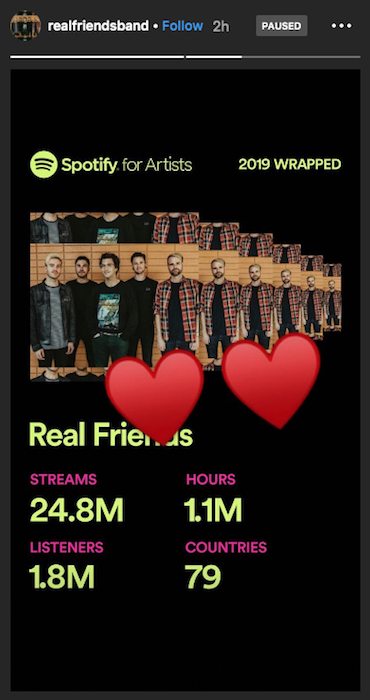 Real Friends released latest full-length, Composure, in the summer of 2018. They followed it up this year with stripped back versions under Even More Acoustic Songs EP.

Spotify has released its official Wrapped list of this year’s top artists and albums, including the decades’ most-streamed artist and album. Billie Eilish and Post Malone both landing on the rankings

Shawn Mendes and Camila Cabello’s single “Senorita” dominated the track for 2019 globally while “Sunflower” by Post Malone and Swae Lee came in as the most-streamed track in the U.S.

Post Malone had a successful year as he is crowned this year’s most-streamed artist with 6.5 billion streams, including holding the most-streamed album in the U.S. with Hollywood’s Bleeding. The album ranks second globally.

Ariana Grande rounds out as the third most-streamed artist after releasing her marvelous album thank u, next. Grande has made the top 10 Wrapped list two years now.

With 2019 wrapping up itself, Spotify has released the top artists of the past decade. Among those include Drake as the number one artist, followed by Ed Sheeran and Post Malone. Grande additionally is the top female artist of the decade with Rihanna, Taylor Swift following behind. See the full list here.

Who was your most-listened artist on Spotify Wrapped 2019? Let us know in the comments below.